While this issue is strong on software, I suspect the next one to be more so. Expect updates from all the major players in digital asset management and RAW conversion programs in 2008. If When one of these new apps tempts you to move from your current set up, consider how you will do it. And then consider how you will do it the next time. In DAM you should expect to change software (and hardware) many times over the life of your collection.

xlTransformer – Serial monogamy?
John Beardsworth coined the phrase “serial monogamy” to let users of DAM know they will eventually move on to different programs. How easy you get data in or out should be a prime consideration before investing in any DAM software. To this end John released a mini application called ‘xlTransformer’. After exporting data out of your current DAM app xlTransformer can map information to your new DAM software using Microsoft Excel.

John includes instructions on how to use xlTransformer or using his consultancy service he can migrate the data for you. Visit www.beardsworth.co.uk/iview.php for xlTransformer and more DAM stuff.

Phase One Capture One 4 – will import & export DNG
Phase One have a beta version of the long awaited Capture One 4 RAW workflow software. It is the first major RAW converter to support DNG outside of Adobe. DNG (Digital NeGative) is an Adobe RAW file format that lets you convert proprietary camera RAW files to a documented format. The benefits are many. DNG will more likely be accessible long after proprietary camera RAW formats have been abandoned. Full documentation means any software or hardware manufacturer can safely read and write DNG. Thumbnail and preview images stored inside the file can be updated with new adjustments. Metadata including EXIF, IPTC, XMP and RAW adjustment settings can be stored in the file instead of a database or sidecar file. 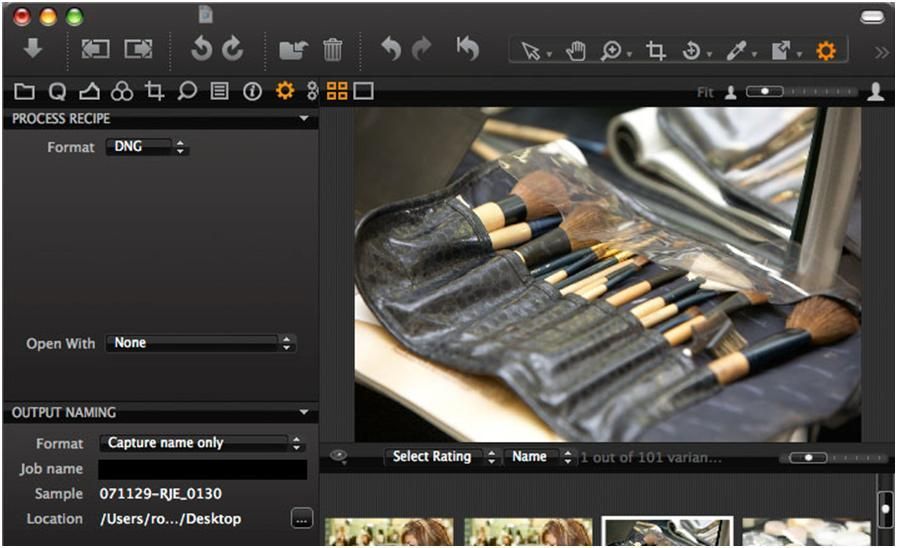 Capture One 4 can import and export DNG files.

Capture One 4 (beta 2) can read and export DNG. Even if Phase One doesn’t support your camera model (like the original Nikon D1), converting it to DNG lets C14 read and convert it. At this stage Phase One appear to be using one color profile for all DNG files, whereas proprietary camera RAW files have a dedicated profile (or two). This means the rendering isn’t as good with DNG as it could be. DNG export is welcome but Phase One don’t yet embed a thumbnail or preview which is one of the main benefits of DNG. Hopefully Phase One will rectify this when Capture One 4 is released early 2008. This should push other vendors to add DNG support for their RAW converters.

Keywording – A new standard?
Adding metadata to images adds value to them. The IPTC keyword field has a long history and is widely supported. Currently this is a flat field so if you have hundreds of keywords the list can long and unwieldy. Many apps let you enter and view keywords in a hierarchy, but this interface is only seen inside that program. View it in another program and it is one long list.

Nikon supports XMP – And IPTC Core
By now Nikon’s new D300 and D3 cameras will be on the shelves, or on back order. Perhaps of more interest is the new Nikon Capture NX and ViewNX software. The latest versions support both XMP and IPTC Core making Nikon NEF files only the second RAW file format to do so. Adobe DNG was the first.

While adding the fields available in IPTC Core is important, adding custom XMP fields opens new possibilities for NEF files. For example Expression Media could now save Sets into the NEF file, once Nikon updates its SDK. This will also push other camera manufacturers to update their RAW formats to XMP.

OS X Leopard – New DAM Features
Ask an IT professional about moving to a new operating system like Mac OS X 10.5 and they may answer, “You first!”.

There will be problems with drivers, programs, bugs. And Leopard is no different! Make no mistake, under the hood Leopard is a major update. iView and Expression Media users are recommended to hold off. Some minor interface problems have shown up but more importantly certain file formats like some PDFs will crash these apps on Leopard.

Mac Leopard improves the reliability of their OS X built-in search engine called Spotlight. Apple have introduced a back up solution for the masses. Time Machine will finally leave no excuse to make back ups for Mac users. It is as simple as switching it on because that is about the only option available. Which is precisely why it won’t suit the 10% of power users who are already have a back up a regime. You can exclude nominated files. Initially Apple recommend you exclude the Aperture library, and Adobe say the same for Lightroom catalogs.

Photoshop – Save for the Web & Devices
Adobe updated Photoshop CS3 to 10.01. Of special interest is the Save for Web & Devices feature. For too long using this save feature meant Photoshop stripped all metadata including copyright information. The reason was to make as small a file as possible, quite logical for images intended for the internet. 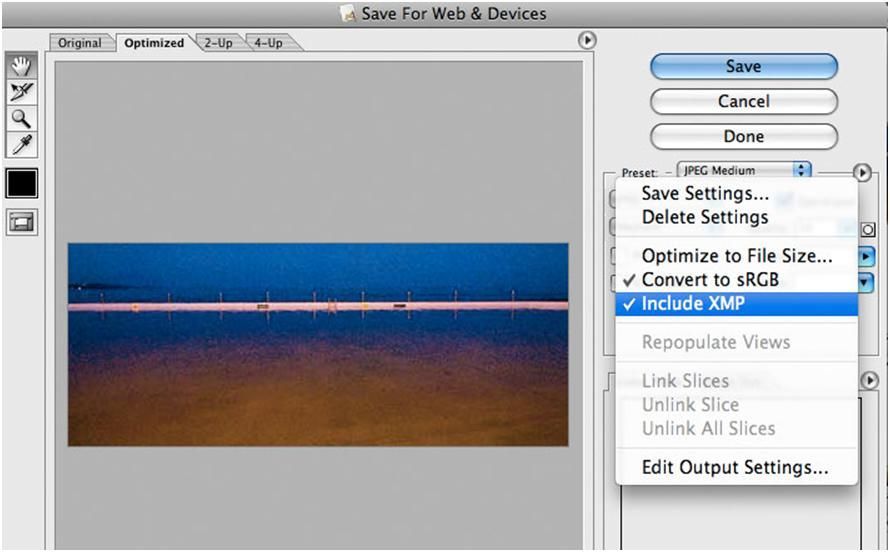 Photoshop CS3 10.01 now lets you retain XMP when saving for the web.

However many of us can live with a file being a few KBs larger to retain our metadata and have been asking for the option in Save for the Web. In Photoshop 10.01 there is now an option to retain XMP metadata. Access it via the fly out menu in the dialog box.

Stay tuned for the February Newsletter where you could win a copy of Peter Krogh’s The DAM Book; the definitive, best selling guide to digital asset management for photographers.

Seasons Greetings and all the best over the silly season.