If you are at all interested in revisiting your images sometime in the future this edition is for you.

Peter Krogh has published the second edition of The DAM Book, Digital Asset Management for Photographers (2009, O’Reilly Media). Since the first edition parts of the DAM landscape have changed dramatically, while other areas remain the same.

Back in 2005 most photographers weren’t too concerned how they managed their image archive. Digital Asset Management was not a term photographers knew of. Now we have Aperture and Lightroom plus a lot more images produced by larger megapixel cameras. 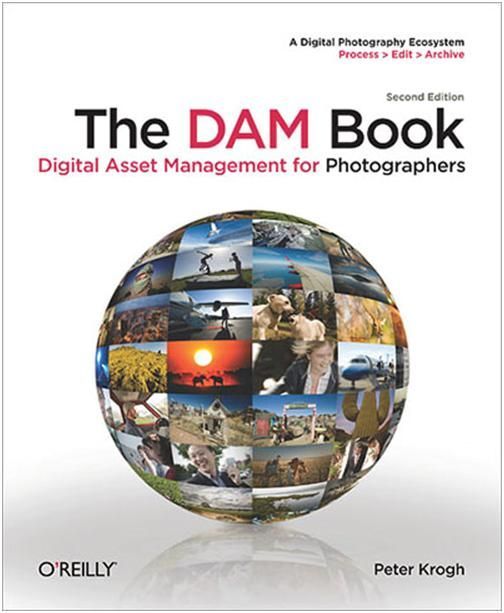 What hasn’t changed is the need to plan your archive and implement future-proof storage methods.

Peter has re-written The DAM Book to cover new technology and use time-proven, industry best practice. Some of that practice being Peter’s own research.

I highly recommend The DAM Book, second Edition. It will bring readers of the first edition up to speed with new technology. If you are just stepping into DAM The DAM Book will help you, whether you are a sole photographer or managing large archives. Purchase The DAM Book from your favourite bookshop, Amazon or direct from Peter Krogh.

If you’ve read anything on DNG 1.3 many argue Opcodes were written so Adobe can deal with Panasonic’s in-camera adjustments for some of their 4/3 format wide angle lenses. While this may have some truth to it the result is a more versatile DNG format that offers forward compatibility unlike some proprietary Raw formats and converters. We’ve already seen orphaned file formats and updates to Raw converter that ignore any previous adjustments.

Unless you own a time machine (no, not the Apple software!) forward compatibility for your Raw files and metadata is essential. Rarely if ever would you need to open a Raw file in legacy software that cannot understand new adjustment settings.

Phase One have created a new file format to allow users to share Raw files fromÂ their Phase One backs and adjustment made in Capture One. Creating an EIP (Extended Image Package) is an option when importing Phase One Raw files into Capture One. An EIP is simply a zip file containing the Raw file, an XML file, and a folder forÂ Capture One settings, and a small JPEG image that serves as the thumbnail and preview for Windows Explorer, Mac Coverflow, and Expression Media. 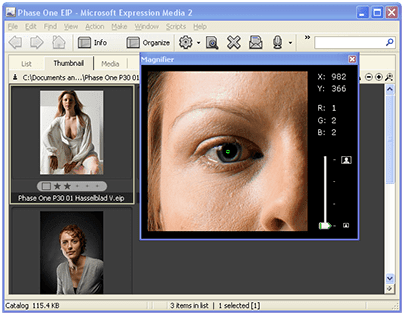 Phase One EIP filesÂ as viewed in Microsoft Expression Media 2.

You can change the EIP file extension to “zip” and easily uncompress the file to extract the original Raw file. Unfortunately when Capture One creates theÂ EIP and embeds the Raw file it renames them all to “0.tif”. That’s bad digital asset management to having multiple files called “0.tif” and will create issues down the track.

Potentially the EIP concept of compressing files into a zip package could be used to manage images created from multiple files. Many photographers capture multiple images with the intent of making one image. Panoramic stitching and HDR are typicalÂ examples. Have one EIP file with an embeddedÂ XML describing how they combine would make such captures more manageable and secure. It all too easy to see what at first appears to be a boring, badly composed landscape image forgetting that it is an essential part of a panoramic stitched image.

DAM Audit – Do it now

More and more museums, art galleries and government departments are contacting me for DAM consultation. The first step in the process is a DAM Audit. Typically this is a risk and cost assessment that finance departments can use to evaluate whether further investment in DAM is warranted. It nearly always is!

These types of institutions, in particular government ones, have a moral and legal obligation for due diligence in archiving public records.

You should also do a DAM audit of your processes to ensure the future viability of your image collection. This involves reviewing your DAM workflow and comparing it to best practice as outlined in The DAM Book.

For larger collections a professional may be required. While they may not enjoy the comparison to tax auditors my northern hemisphere colleagues are widely experienced in DAM audits. Peter Krogh (USA) and John Beardsworth (UK and Europe) have evaluated image collections for individuals and institutions.

Lightroom is not robust enough to handle a DAM Workflow, just yet. Many hope it is and Adobe certainly won’t stop you buying Lightroom 2 for digital asset management!

John Beardsworth knows the shortfalls in Lightroom when it comes to DAM. He has invested a good amount of time learning Lua, the scripting language that Lightroom uses for extensibility. The truth is there is a lot of untapped potential in the current version of Lightroom. John has found ways toÂ tap thatÂ with some new plugins for Lightroom 2, both for Mac and Windows. 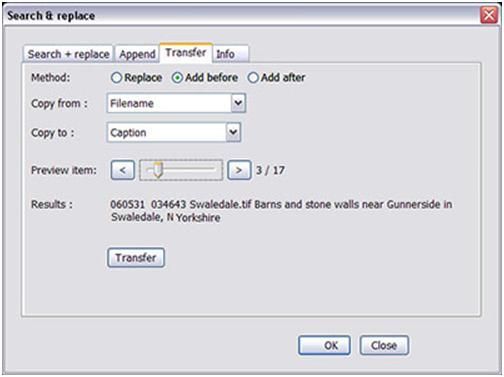 With John’s plugins you can search and replace metadata, find items missing from your Catalog, view folder size, and there are more in the making. Keep an eye out for John’s XML Generator and an importer to migrate from Extensis Portfolio or Microsoft Expression Media.

Take the Garbage Out – XML noise

While migrating an Expression Media catalog using XML I ran across an issue where the XML was invalid. Over the years a lot of garbage characters like small squares, Yen symbols, etc, snuck intoÂ the Catalog. This could be caused by unicode orÂ editing the Catalog on different operating systems and versions of QuickTime. Whatever the cause it had to be removed.

The simple solution was to edit the XML directly and First Object offers a compact, free editor for Windows. After validating the XML, finding the rogue characters it was just a matter of doing a search-and-replace. 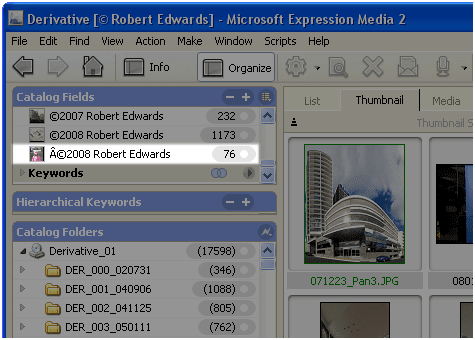 Highlighted is some “garbage” causing noise for XML imports.

It’s also worth locating the original files that contain the garbage characters. In Expression Media that is typically in fields that you may have entered special characters like the copyright symbol ©.

You should soonÂ see Expression Media having a better focus on theÂ core market that iView originallyÂ attracted. Let’s hope it’s not too late for Microsoft to retain iView’s loyal users.

All too often images are lost due to human error. And a lot of the time it’s because people are trying to manage their image collection on hard drives too small for the job.

With the cost per gigabyte for hard drives it makes sense to buy the largest capacity possible. This is one area not to skimp. 1TB (terabyte) hard drives are now the sweet point if you want bang for buck. The new 2TB drives are not that much more. It’s a safe bet you will always need more storage space.

Now with 20+ megapixel cameras and digital backs becoming the norm many photographers are running out of storage space for their Raw files. These Raw files are 35MB to 50MB each or more.

Photographers are looking at external storage; be that RAID, JBOD or Drobo. You need to know Raw converters are more than likely going to feel sluggish.

To work efficiently all Raw converters I’ve assessed need the Raw files on a local hard drive. Otherwise changes made to images have a lag and it very quickly becomes frustrating.

One solution, while not ideal, is to copy Raw images to a “Work” folder on your local hard drive when working on them. The issue then arises as to archiving any new adjustments, especially if one of your back ups is a read-only media. The best option here is to store the adjustments in the Raw converter database as offered by Lightroom.

Thanks to those who attended my recentÂ talk on DAM at PMA Australia. Another keynoteÂ speaker at PMAÂ was documentary photographer Stephen Dupont. He had an interesting take on managing his image collection for the long term. 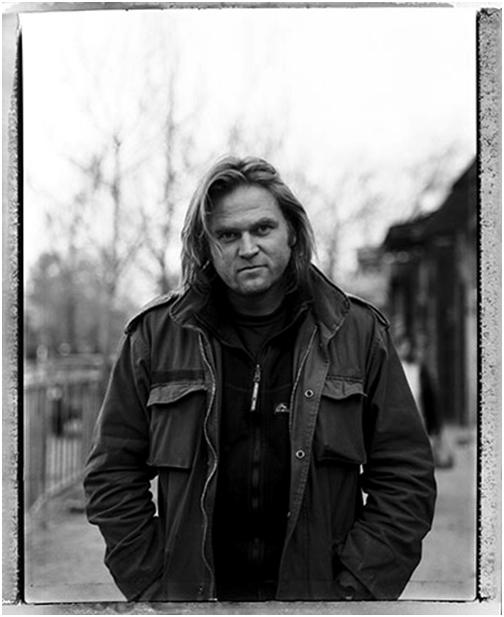 Stephen has photographed in some of the most dangerous places on earth: Afghanistan, Cambodia, Iraq, Rwanda, Somalia, Zair and Papua New Guinea. Stephen photographs to document the people in his images. He truly is what Cornell Capa called a “concerned photographer”, humanitarians passionate about the plight of those who allow him to photograph them. 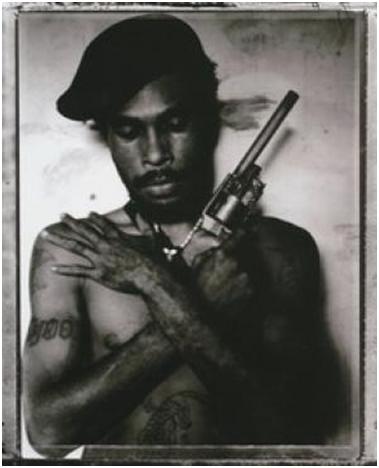 Stephen is also concerned that the message he creates will disappear if left solely to fickleness of the media. In an interview withÂ the ABC (Australia) Sunday Arts program Stephen creates limited edition fine art books and prints of his work. That way museums and art galleries will archive his work for future generations. To see Stephen Dupont’s amazing images visit www.stephendupont.com. To see how the New York Public Library archives documentary photography including Dupont’s watch the video at: