One catalog – Or multiple catalogs?
As more photographers (and other creatives) use database driven apps like Adobe Lightroom there are more mistakes being made. The key to using any database app is to *always* use it. When you move, rename, annotate, delete, append or do anything to your files do it in the database app. That way it will know you have changed the file’s attributes. Do any file maintenance outside the database app, such as renaming, and the database loses connection to the file. You have “virtually” lost the file.

The same goes with using multiple catalogs within the same application. Use one catalog for everything, if possible. Why?

If the same items are in multiple catalogs and you want to rename or change metadata, which catalog do you do it in? And how do the other catalogs know of the changes? 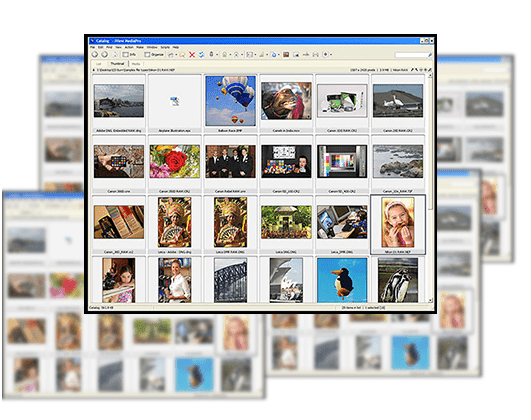 Multiple catalogs can lead to strife.

Worse still is using multiple database apps! Unless you are incredibly disciplined keeping track of changes in two systems is a prescription for disaster. Creatives are typically not very disciplined.

What is a disciplined database driven workflow? Well I’m glad you asked! You can still download my free Adobe Photoshop Lightroom whitepaper from Adobe that demonstrates such a DAM workflow:

Metadata – Saving it into files
One big difference in using database apps is metadata you enter goes into the database, not the image or file. Metadata in files can be thought of as a layer of data above the image data.

Metadata can be thought of as a layer of data.

In Adobe Bridge or any media browser when you add metadata it goes directly into the file. Adobe’s senior engineer Winston Hendrickson calls this file handling “explicit”. If you write metadata to a file it is immediately pushed into the file (or sidecar file if a proprietary Raw file format).

Hendrickson refers to metadata management in database apps, such as Lightroom, as implicit metadata. It lives in the database until you intentionally export or write your metadata to the file so other apps can read it. In Lightroom that’s as simple as selecting the file(s) and typing Cmd+S (Ctrl+S on Windows).

Imagine you use Lightroom to caption images and then open them in Bridge. Bridge has no way of knowing about those captions entered into Lightroom’s database. Assuming you didn’t deliberately write your metadata to the files in Lightroom.

Similarly, if you see an image in Bridge you know it is indeed there in the folder you’re browsing. In Lightroom the image you see may or may not be there, even if you’re viewing a full screen preview.

Expression Media – Getting your data out
Expression Media should have been updated to work with Windows 7 and Apple Snow Leopard. It must be embarrassing for Microsoft that one of their apps is not compatible with their own operating system. Even manufacturers slow to release updates like Nikon have Windows 7 compatible versions available.

Migrating your data from one database app to another can be tricky. Eventually you will need to move on and how simple that is depends on the manufacturer of your app. Some want to lock you in so they have a customer for life. Some don’t see why you would want to leave. Others like iView/Expression Media offer you several methods. 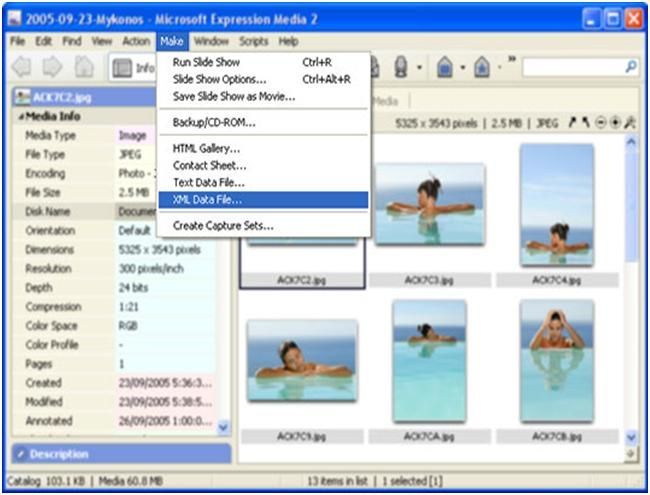 Export all your Expression Media data as XML.

A faster and simpler method is to export the metadata as a single XML file. The better DAM apps can import this data. How you get them to do it may require a script, plugin or expert to help out. 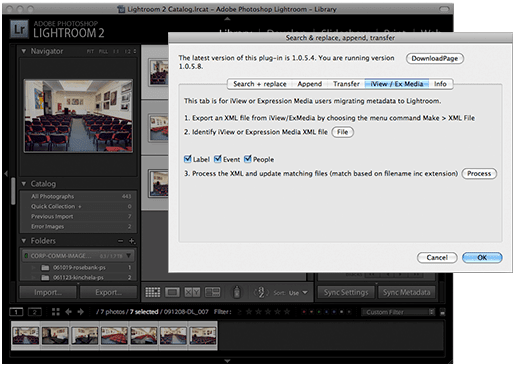 The plugin does a lot more than migrate your data from iView / Expression Media. You can search metadata in Lightroom and replace it, append it, or even move it to another IPTC field. The Beardy SearchReplaceTransfer plugin should be ready for purchase shortly. Subscribe to John Beardsworth’s RSS feed to be kept informed about SearchReplaceTransfer and other essential Lightroom plugins:

Adobe Lightroom 3 beta – Sneak peek
Adobe is in the midst of developing Lightroom 3 and has again released a public beta for user feedback.

Warning! The public beta is far from complete and you should not use it for any serious work. The Lightroom Catalog you make with this beta will most certainly not work with the final release. What Adobe want is your opinion on Lightroom 3.

Lightroom 3 is not feature complete. Far from it! What you can experiment with is the increased speed, efficiency and new features.

Try the new improved Import feature. If at first the dialog seems crippled click the Advanced button, bottom left. Now you may be overwhelmed with options. Thankfully after applying your settings you can and should save them as a preset.

The main benefit of the new Import dialog box is the initial back up files now match the originals if renamed. And you should rename files on import and back them up. 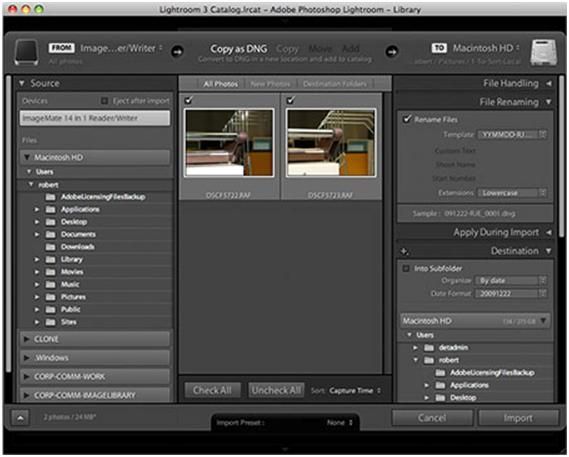 Test the noise reduction, Adobe want it to be the market leader. A new Film Grain feature helps mask noise and/or give a retro effect. I like to add it to portraits where grain masks highlights.

Lightroom 3 will give more control over music in slideshows and the option to export them as videos with music. It would be nice to be able to catalog those movies in Lightroom…

Print Package can now be customized without needing to hack the templates. While no where near as elegant as Aperture’s freeform Books it hints at what may soon be possible in Lightroom.

A big move for Adobe is Publish. Not only can you upload images to sites like Flickr, you can also update those galleries and import feedback.

Expect more plugins when Lightroom 3 is released. The plugin architecture has been changed but still relies on the uncommon Lua language.

As mentioned the public beta is far from complete. More so than the previous betas for Lightroom 1 or 2. You should at least be able to get a feeling for the improved speed and stability. If you’re game visit Adobe Labs to try the free Lightroom 3 beta:

Capture One 5 – No DAM improvement
First the good news. Phase One have updated Capture One to version 5. 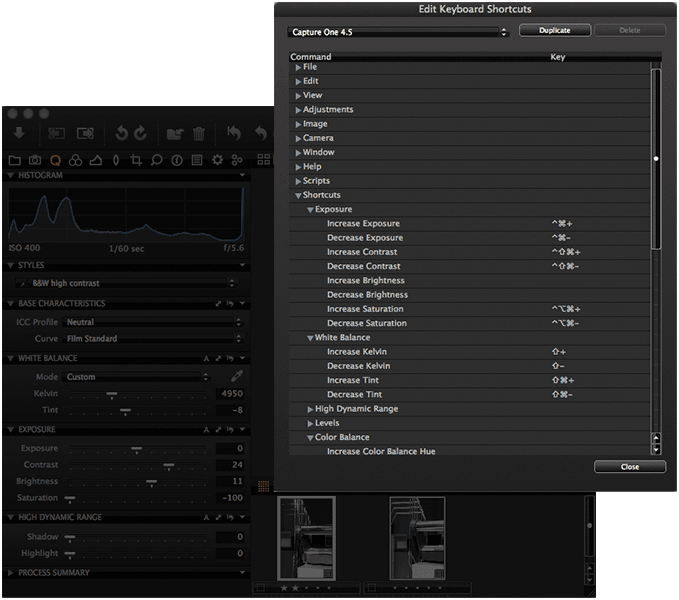 Keyboard shortcuts return in Capture One 5.

On Windows the keyboard shortcuts for basic adjustments are:

Using the arrow keys you can very quickly scroll through hundreds of images fine-tuning every photo as you go. Prior to Capture One I was forced to batch groups of similar images. But now every image receives some TLC. Screen refresh is so fast that adjustments in Capture One give immediate user feedback. Essential for making creative decisions.

While I don’t have empirical evidence the Raw conversion from DNG seems better than in version 4. I now prefer them to the conversions obtained from the Nikon NEFs, especially with skin tones. Of course this is subjective.

As of Capture One 5.01 metadata has improved from v4.

The not-so-good news is metadata support is still buggy. Capture One will now parse most embedded metadata. Be careful as it appears to cache the initial metadata so if the files are modified outside Capture One after initial import it doesn’t refresh the metadata.

Phase One still only supports legacy IPTC. As mentioned above no camera manufacturer openly supports IPTC Core so we can’t blame Phase One for that. IPTC Core has been the standard since 2004.

Adobe DNG supports IPTC Core and yet Phase One ignores it. And that includes ratings. I can’t help but feel DNG has token support. Phase One seem to be getting ill-informed advice on DNG and treat it only as a derivative file format, ignoring its main benefits. Capture One needs to apply individual camera profiles to DNG not automatically use a single generic profile. When converting to DNG Capture One should embed adjustments inside the file and update the embedded thumbnail and preview. The process to do this is fully documented and freely available to Phase One.

Capture One 5 is a paid update from earlier versions. A trial version is available at:

AtomicView – One to watch
18 months ago on the DAM Book forum Yves Schmid Dornbierer from AntZero asked for beta testers for a new DAM app on Mac. Swiss made AtomicView has an unusual interface, to say the least. Not surprising when you learn Dornbierer’s background as a software engineer is in the video game industry. Like early versions of iView Multimedia, this new app boasts a lot of power and potential.

First off the numbers and they are very impressive:

* Price is about US$85, even less with a volume discount.
* Minimum specifications are meager; a Mac G4 or Pentium III PC with 512MB RAM.
* Using a SQL Lite database AtomicView separates thumbnails, previews and data making it very scalable. Stephane from AntZero says he’s tested Catalogs containing a million images.

AtomicView can catalog images including Raw, as well as sound files and movies.

It’s export capabilities are also impressive. AtomicView is not a Raw converter but can convert files as derivatives to half a dozen file formats, with or without watermarking. It can export images as web galleries (with multiple language translations!) and as movie slideshows including transitions.

The Mac version is now at v1.31. A Windows version is currently in beta and due mid 2010. More exciting is the Server version expected within months in early 2010. 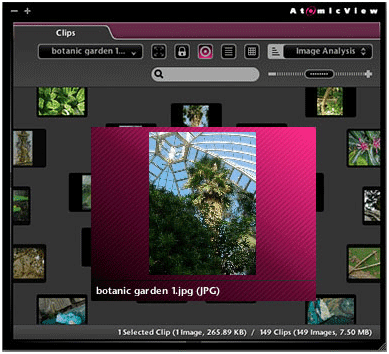 Any negative points? AtomicView’s unorthodox layout leads to a steep learning curve. The Groovy view is indeed groovy, but serves no real function other than to show off AtomicView’s capabilities. Some essential features are missing such as a folder view and extensibility via scripting.

The user manual has poor translation to English which is either cute or frustrating, depending on how quickly you need answers. AntZero do have active support forums. They also have several HD movies online demonstrating various aspects that will get you up to speed quickly.

Over the holiday break I highly recommend those with a Mac to download AtomicView and give a whirl. Apart from the nag screen on launch, all aspects of the app are available with the trial version at:

DAM Workflow seminar – North Queensland Australia
If you’re keen on a tropical break in January the Australian Institute of Professional Photography have asked for me to share some advanced knowledge on DAM and demonstrate the way in which your workflow can be designed to free up your time. Working with programs such as Adobe Lightroom, Bridge, Photo Mechanic, Expression Media and Capture One Pro, this seminar will assist in refining your workflow.

As the storm season approaches in North Queensland we will help prepare your backup and recovery systems ready for a busy 2010.

Also speaking will be Peter Myers, the new Executive Officer at the AIPP, to talk with all photographers on how professional photography is changing in these times and what it means to be an AIPP member.

Come along, be informed, prepare and celebrate the start of 2010.

Accommodation is available at the new Met Apartments at your expense. Platters of finger food is included for dinner.