First off, What is DNG?
Well it’s not Dolce & Gabbana as a photography student once asked me. DNG (Digital NeGative) is a digital photography file format created by Adobe Systems. It contains all the data captured by cameras that offer raw format output.

OK, What Is A Camera Raw File?
Most of the time when you take digital photos you create JPEG photos. JPEG images have been processed and cameras discard the raw data. Many cameras have the option to save images in a proprietary raw file format. For example, Canon have CR3, Nikon NEF and Olympus ORF. These formats are unique to each manufacturer and even each camera model.

The trouble is every camera raw format is undocumented and needs to be reverse engineered by software developers so photographers can process them. This requires heavy investment in resources, time and potentially legal issues as they are proprietary file formats.

In 2006 a group of photographers lobbied for an open raw format without success. Two years earlier I asked if it was feasible for Adobe to create a documented camera raw format that proprietary raw formats could be converted to.

DNG
Adobe is one of the software companies that has to deal with the overheads associated with camera raw formats. Thomas Knoll, the co-creator of Photoshop, is an avid photographer and developed his own software to process digital images, now known as Adobe Camera Raw. Knoll knew there had to be a better way to manage raw camera data so in 2004 proposed DNG.

Fully Documented
DNG is owned and patented by Adobe who offer documentation and a license. Camera companies including Leica and Pentax use it for raw capture as do Apple and Google for their smartphones. 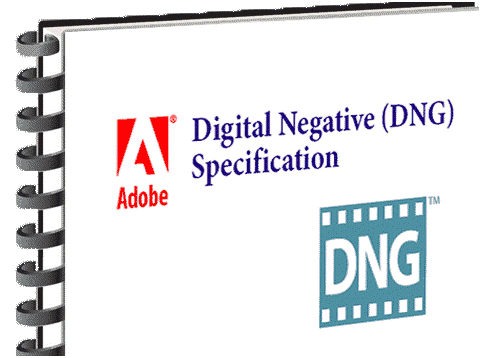 Software companies have been slow to take up DNG as an output format but all major vendors can process DNG files. Some competitors to Adobe’s cite their ownership of DNG as barrier to full adoption and simply a business decision. For the record, Adobe also own the TIF format that all camera raw formats are based on.

Data Validation
The DNG spec includes the option to embed a checksum for the raw data to test its integrity. Photographers can use software like Adobe Lightroom to validate their image archive. Processing images through the free Adobe DNG converter is another way to check the health of raw files.

Embed Metadata
Due to the undocumented nature of camera raw files it’s neither recommended nor safe to write metadata to them. JPEG and TIFF are documented so adding descriptions, copyright, attribution and contact information is simple using the IPTC standard.

To add such information to any proprietary camera raw file software typically creates a sidecar file. Often these are .xmp files with the same name as the image file. Sidecar files are easily lost along with your metadata.

DNG allows the safe embedding of metadata with clear instructions for third parties on how to do it.

Embed/Extract Full Resolution JPEG
Another form of metadata is the embedded preview image. I also use the option to embed full resolution JPEG images inside my DNG files. These reflect the processing I have done on the images and can be viewed in cataloguing software and easily extracted for fast proof images.

ISO Raw File Format
The International Organisation for Standardization is in process of making a camera raw standard based on Adobe DNG. Adobe have a track record here with their PDF format, now a ISO standard.

Archival
My motivation to lobby for a standard raw camera format is so future generations can view them. DNG offers many benefits however this will be its greatest legacy.

Let me know your thoughts or comments over at Linkedin.